Come take your chances at one of Baton Rouge's Riverboat Casinos! Whether dining , playing or catching a show there's plenty of fun things to do.

The L'Auberge Casino & Hotel Baton Rouge features a single-level, 30,000-square-foot gaming floor with 1,500 slot machines and 51 table games, including a poker room; a hotel with 205 guestrooms and a rooftop pool. The casino also includes a multi-purpose event center with concert seating for up to 1,400 people or banquet seating for up to 800 people, a covered parking garage, unique dining options and entertainment venues overlooking the Mississippi River.

The Cajun Circus Port Allen Truck Stop is the oldest operating truck stop in Louisiana. It has a colorful history indeed. In 1943, Raoul Lieux, who was Hugh Marionneaux's grandfather, leased the property from R.O. Long and ran it as service station and restaurant. Hugh is the gregarious proprietor of Hugh's Place next door, and he supplied much of the information on the truck stop history. Following Raoul Lieux, Mr. Keller continued the operation of the service station and restaurant. In 1946, Philip Sigona, a cross country truck driver from New Orleans, developed the property into a truck stop. Ever since under various owners it has continued in operation as a truck stop.

Joe Green, who was one of Governor Earl Long's bodyguards and the head of Troop A of the State Police, took over in 1953, and operated the truck stop until about 1960. Joe really developed the truck stop. His father, Joe Green, Sr., was one of Governor Huey Long's bodyguards and was the Chief of Police. At that time before refrigerated trucks, weigh scales and ice were the two main reasons for the location and success of this truck stop. With the truck weigh scales just down the road, the trucks carrying produce across the country loaded up their trucks to the maximum allowed weight with produce and then added ice. Just before approaching the weigh scales, the trucks dumped their ice and weighed in. Then the trucks pulled into this truck stop to buy fresh ice to cool their produce and continue on their journey. Traveling west, the next weigh scale was in Texas. For example, Hugh remembers cutting up and blowing 6 to 8 inches of ice on truckloads of corn, then hosing them down and repeating the process until their entire loads were chilled, followed by blowing more ice into the front bunkers of the trucks. Boats pulled into New Orleans with bananas that were loaded on trucks for delivery. The trucks starting out in New Orleans did not even bother to ice their loads of produce until crossing the weigh scales, and then they pulled into this truck stop for ice. So although sugar cane was the main product of this region, ice was the main product sold at this truck stop for many years.

Several other operators followed Joe Green until Craig Major added the casino in 1993, which he called “Major's Horseshoe Club.” Many people still call it “Major's” to this day. He ran it until 1998, when the Cajun Circus took over and continued operations. The casino is essentially the same as Craig Major built it in 1993, while the rest of the facility was remodeled extensively in 1998. 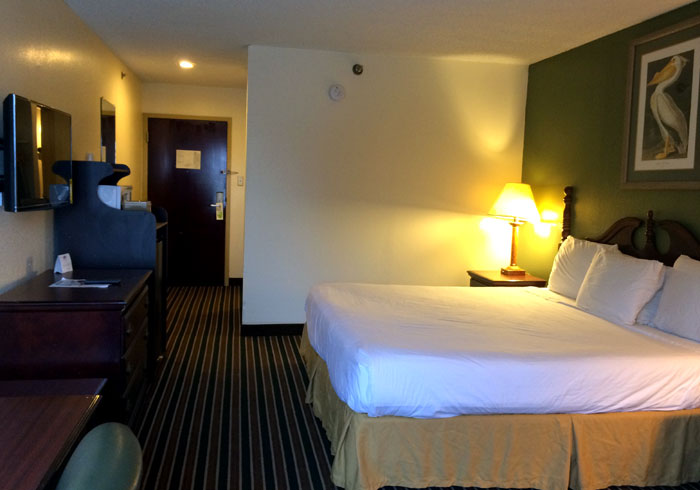 Stay Weekend and get a 5% discount each night, with a 2 night minimum stay. Higher rates on weekends.